The contributions of the Office of Public Affairs to the discourse on the equality of women and men are based on the conviction that the equality of the sexes derives from the fact that the reality of the human being is his or her soul and that this soul has no gender. In the qualities and potentialities that make human beings human, men and women are without distinction. Neither can claim superiority over the other. As the Bahá’í Writings asserts, “Women and men have been and will be equal in the sight of God.” This equality that already exists in the spiritual realm has to be also expressed in practice. Translating such a fundamental principle into reality demands great changes in individual consciousness and in the structure of society. It implies the creation of conditions that will allow men and women who are free from prejudice to work shoulder to shoulder for the construction of an ever-advancing civilization.

Over the past many years, the Office in collaboration with a wide range of groups, organizations and government agencies has made a range of efforts in promoting this principle. Given below are some of the themes on which the Office has been organizing a series of conversations.Over the past many years, the Office has been exploring these questions with various groups, individuals and organizations concerned for the protection and well-being of children. Among the various social structures that impact the condition of women, those that relate to the economic arrangements of society merit particular attention. Gender injustices are evident in various economic structures whether they relate to the ownership and access to resources, gender-based occupational segregation in the labour market and the consequent limits placed on the possibilities for the professional development of women; the burden of unremunerative care work and the lack of child care facilities; the concentration of women in the informal economy and the tendency of women’s work to be rendered invisible. The deprivation women face in their participation in the economy becomes an extension of the deprivations they face at all stages of life within the family - whether it be lack of access to education, to nutrition, to economic resources, to reproductive choice and to participation in decision-making or the impact of domestic violence or regressive cultural and religious traditions. Participants in this discourse explore the implications of regarding the equality of women and men in the economic domain as an outcome of transformation in both attitudes and beliefs as well as the structures of society. Raising Men to be Promoters of the Equality of the Sexes

The profound transformation in society required to achieve the equality of women and men will not be achieved through the efforts to empower women alone. Enduring change will only come about when both men and women work together shoulder to shoulder in building a more just society where human beings – whether men or women – are encouraged to develop their full range of spiritual qualities and intellectual capacities. Men have a challenging role to play in this regard - to overcome immature conceptions of masculinity that men are socialized into by institutions such as the family, the education system and the media. Participants in this discourse explore the transformation envisioned through overcoming gender-based stereotypes and prejudices that are ingrained in culture but also in the institutions and structures of society. 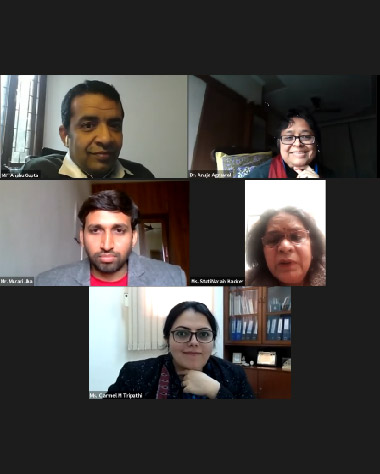 Family as a Space for Fostering the Equality of the Sexes

The family is a fundamental social institution where conceptions related to the role of women and men are learned and practiced. Not only is the family the first space where human beings learn those patterns of thought and behaviour that are associated with being a man or a woman, it also provides the structure where these conceptions are given concrete shape in the form of well-defined gender roles. Thus, a society’s advancement towards the goal of the equality of the sexes will remain superficial unless a simultaneous effort is made to refashion the family as an institution that embodies this principle to ever higher degrees. For this reason, the Office of Public Affairs has initiated a conversation on the kind of changes that the family as an institution would need to undergo to serve as a seedbed for the concepts, attitudes and values that promote the equality of the sexes and to model the kind of transformation that society as a whole would need to achieve.